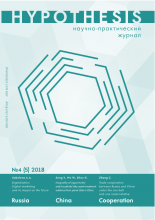 CONTENTS OF THE ISSUE

INTRODUCTORY NOTE TO THE FIFTH ISSUE 3

Zhang Chi Trade cooperation between Russia and china under the one belt and one road initiative. 5

Liu Yang The opening of a new era of sino-russian cooperation under the concept of "the community of shared future for mankind". 34

Liu Xiaoyin The “belt and road” initiative and the greater Europe and Asia partnership — economic and trade cooperation and development between China and Russia. 38

Soboleva Anastasia Digitalization. Digital-marketing and its impact on the future 48

Fang Fuqian, Wang Huiling Analysis on the Sino-Russian Trade Potential under the Background of “the Belt and Road” Initiative 63

Zhang Zhongmin, Hu Linmei The improvement of three-dimensional marine awareness construction under the “the Belt and Road” strategy 91

Pinegina Irina, Zubarev Aleksandr Fundamentals and conditions for training Of foreign experts in the field of digital economy at pacific national university 124